I have recently completed With You With Me’s Penetration Testing course. In that course, they utilised Metasploitable 2 as the basis to conduct training. As you will see from my Blog, I have completed quite a few Vulnhub VM’s and am comfortable with exploiting a Linux System and Metasploitable 2 is now quite old. As a result of this I have been wanting to further development my Windows exploitation skills and although I have been completing all Windows boxes on Hack the Box, I wanted something I can do when I don’t have an internet connection - Enter Metasploitable 3.

Metasploitable 3 is the last VM from Rapid 7 and is based on Windows Server 2008. What makes Metasploitable 3 far more interesting than Metasploitable 2 is the inclusion of flags to capture. This blog post will cover how I was able to build Metasploitable 3, a quick walkthrough of how to gain System without Metasploit and how to obtain the hidden flags.

I originally, did not want to cover installation as there are numerous posts floating around the internet covering it. However, I ran into a few issues along the way and hopefully what I learnt to assist others. Unlike Metasploitable 2, Metasploitable 3 must be built utilisng Packer and Vagrant and a provider of your choice (Virtual Box or VMWare). The requirements for Metasploitable 3 are listed on the github repository.

Inside a Ubuntu VM, I utilised Packer v1.0.0 and Vagrant 1.9.1 with Virtuable Box 5.2.8. Utilising the bash script in the Git repository I was able to successfully build Metasploitable 3. However, this was built for VirtualBox and exporting the VM to VMware did not work. I therefore needed to build it for VMWare as that is what I use day to day. I was unable to build for VMWare inside my Ubuntu VM. I was however able to successfully build the .box file utilising packer v1.2.2 and my installation of VMWare Workstation 14. I was unable to use Vagrant successfully as I also needed VMWare Fusion (which I do not have). However, with Packer v1.2.2 I was able to create a .box file with everything inside. I simply unzipped the .box file a few times to get the VMWare files and then imported that into VMWare Workstation.

Now, being called Metasploitable the idea is to use Metasploit to exploit the box. This seems a bit too easy for my liking, so I detail how I gained system without using Metasploit.

Running nmap on the box reveals a plethora of services available to us.

As you can see, this would be a very long blog post if I was to detail all of the possible vectors that are available on this box. There are a large number of web services running and browsing through them I came across a Jenkins v1.637 installation running on port 8484. Browsing to the page - http://192.168.206.135:8484/script, I find that I can enter arbitary groovy script into a console. From here I should be able to execute commands on the box. I test this by entering the following into the Script Console: 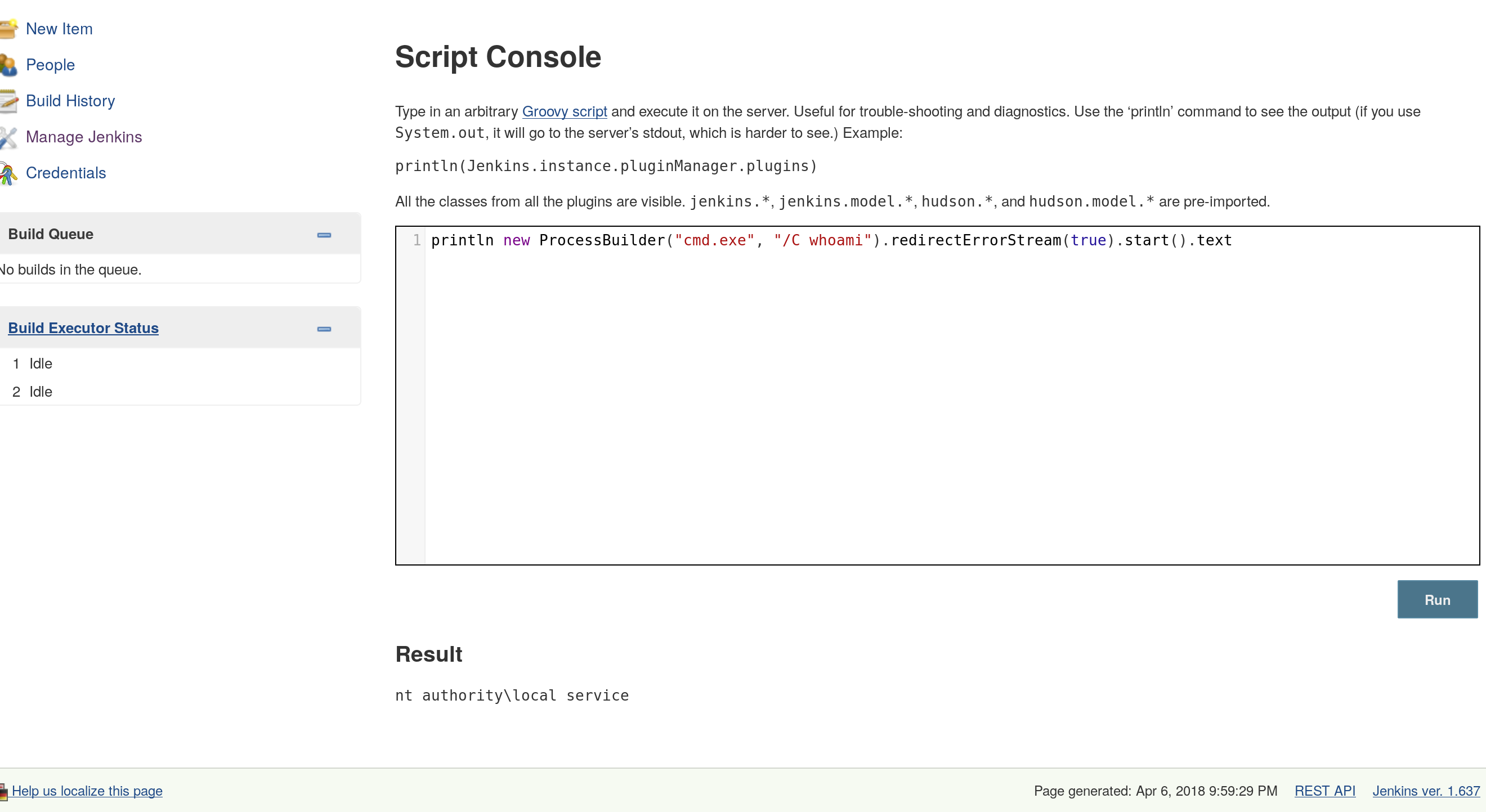 I then generated a payload in msfvenom by using:

I then downloaded the payload onto the machine by entering the following into the Jenkins Script Console:

I then set up my listener with netcat and caught the shell after triggering the payload by entering the following into the Jenkins Script Console:

Now, I had a shell it was time to escalate my privileges. I noted from the nmap scan earlier that Apache Tomcat was running and in some configurations this is run as NT Authority\System. I browsed to C:\Program Files\Apache Software Foundation\tomcat\apache-tomcat-8.0.33\conf and viewed the file tomcat-users.xml to obtain some credentials. This revealed the username and password to be “sploit/sploit” 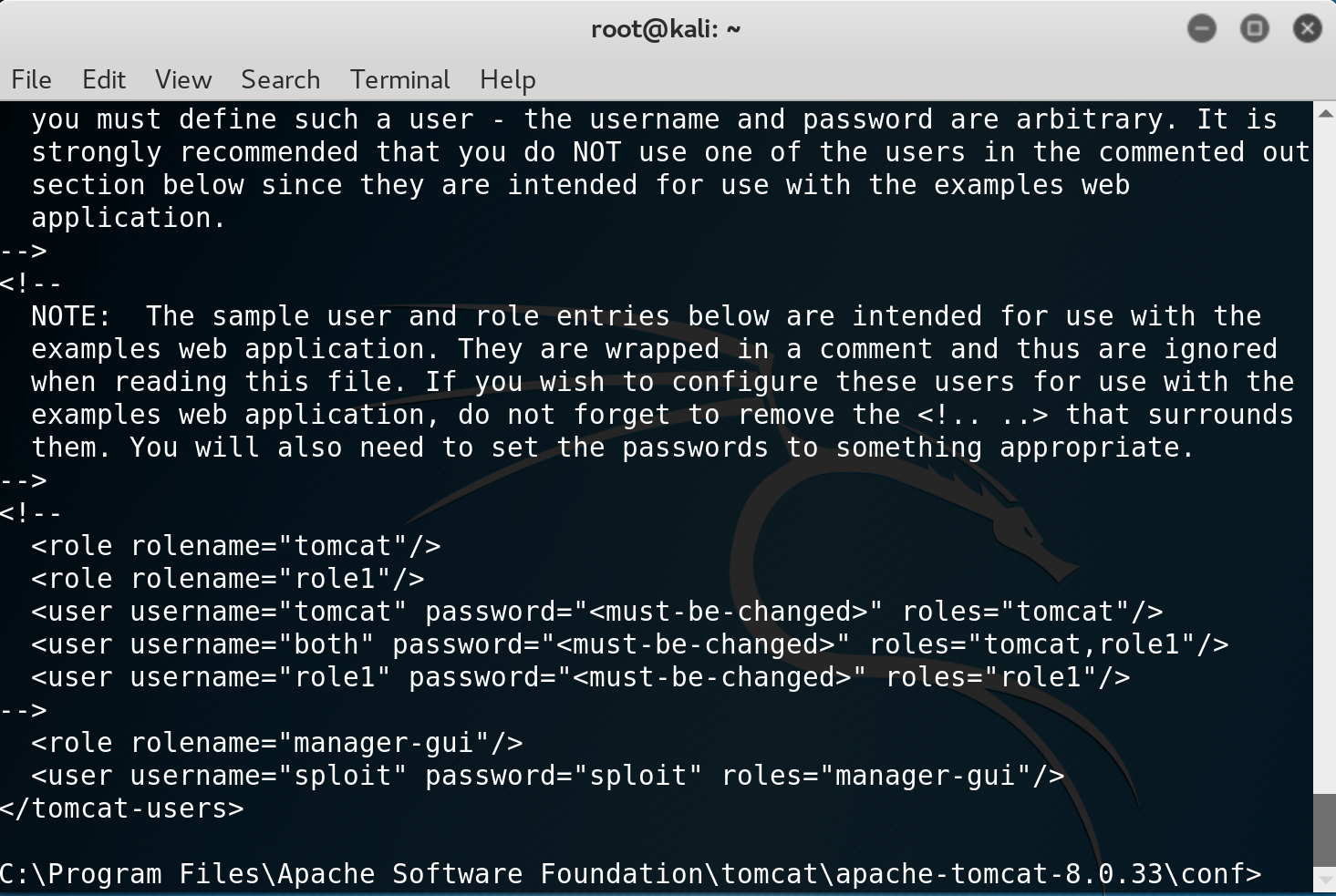 I then browsed to the Tomcat installation at http://192.168.206.135:8282 and logged in. With the level of access I had, I have the ability to upload a .WAR package that will be deployed. I generate a .WAR payload using msfvenom using:

Once the payload has been uploaded, it will appear in the list of installed applications. To trigger the payload you need to browse to the .jsp page that is created. To find out the page name, you need to unjar your .WAR file:

We are now NT Authority\System and lets get hunting for flags!

There are a total of 15 flags hidden inside of Metasploitable 3. Back in 2016 Rapid 7 held a Capture the Flag competition, however we have missed the boat so we are doing this for our own fun! The flags are based on a deck of cards and they are not just simply files sitting on the machine. The flags are obscured and hidden inside of files and some additional techniques are required to obtain the flags.

Once you have System, simply navigate to C:\Windows\System32 and the .png file is sitting right there for you. 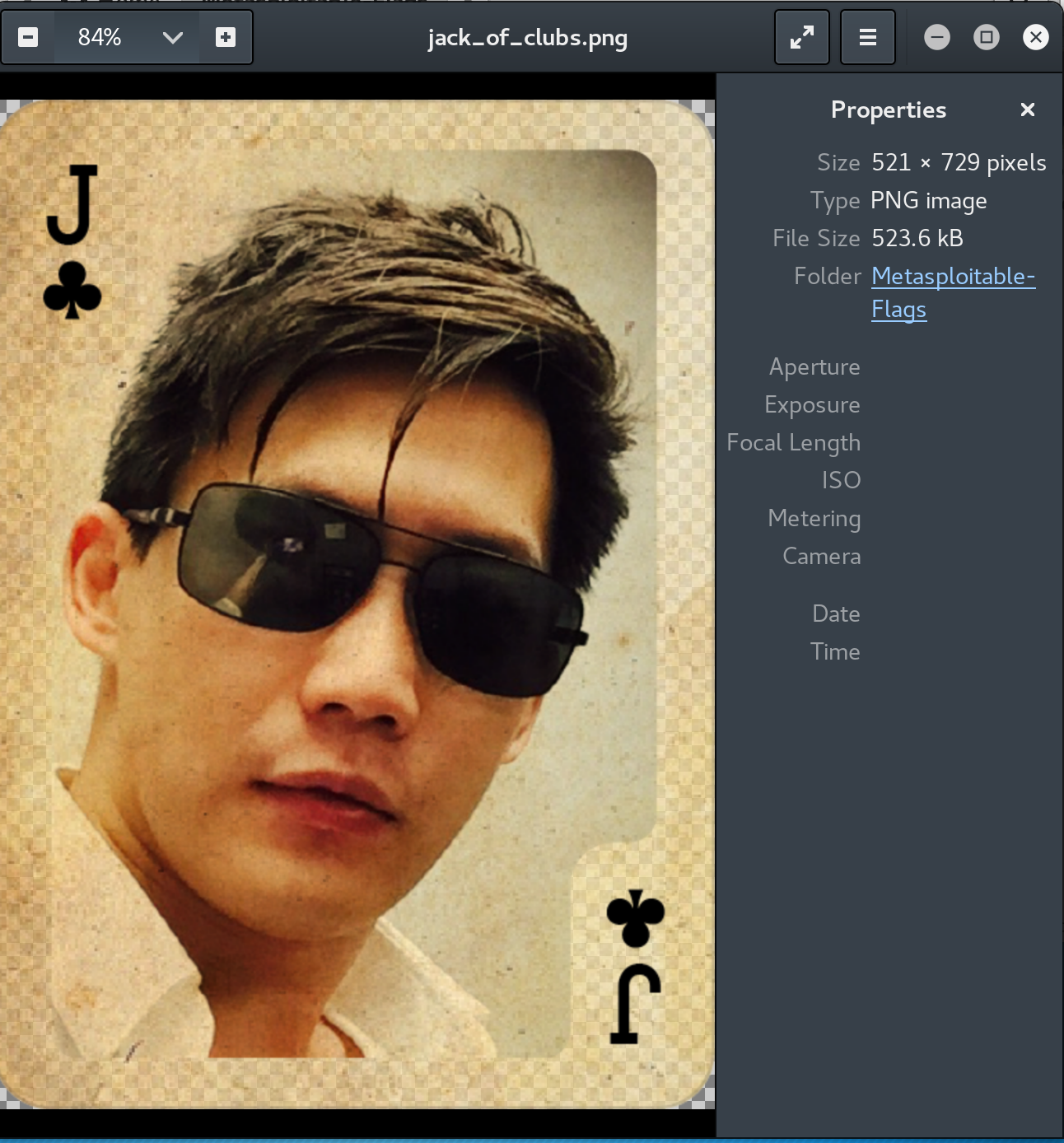 The King of Diamonds can be found two ways - By navigating with your browser to http://192.168.206.135:8585/wordpress/wp-content/uploads/2016/09/ and downloading the file. This is all because the WordPress uploads directory has directory listing available. Or, if you have a shell - navigate to C:\wamp\www\wordpress\wp-content\uploads\2016\09 and transfer the file.

The Jack of Hearts is found in C:\Users\Public\Documents. The file is a .docx file. Simply unzip the file and navigate to the unzip word/media directory to get the .png file. 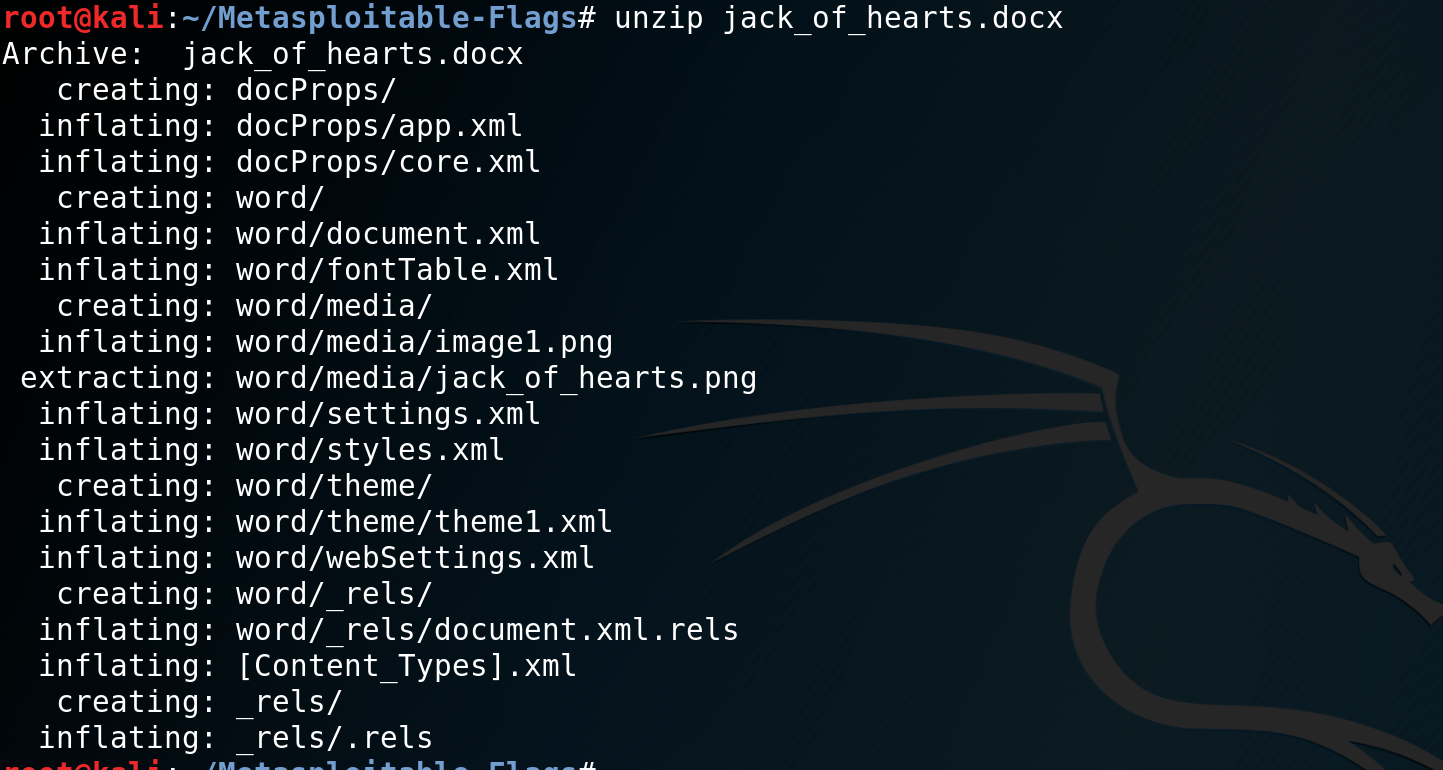 The Seven of Spades is located at C:\Users\Public\Documents. It is a .pdf file. To extract the flag you need to use pdfimages. 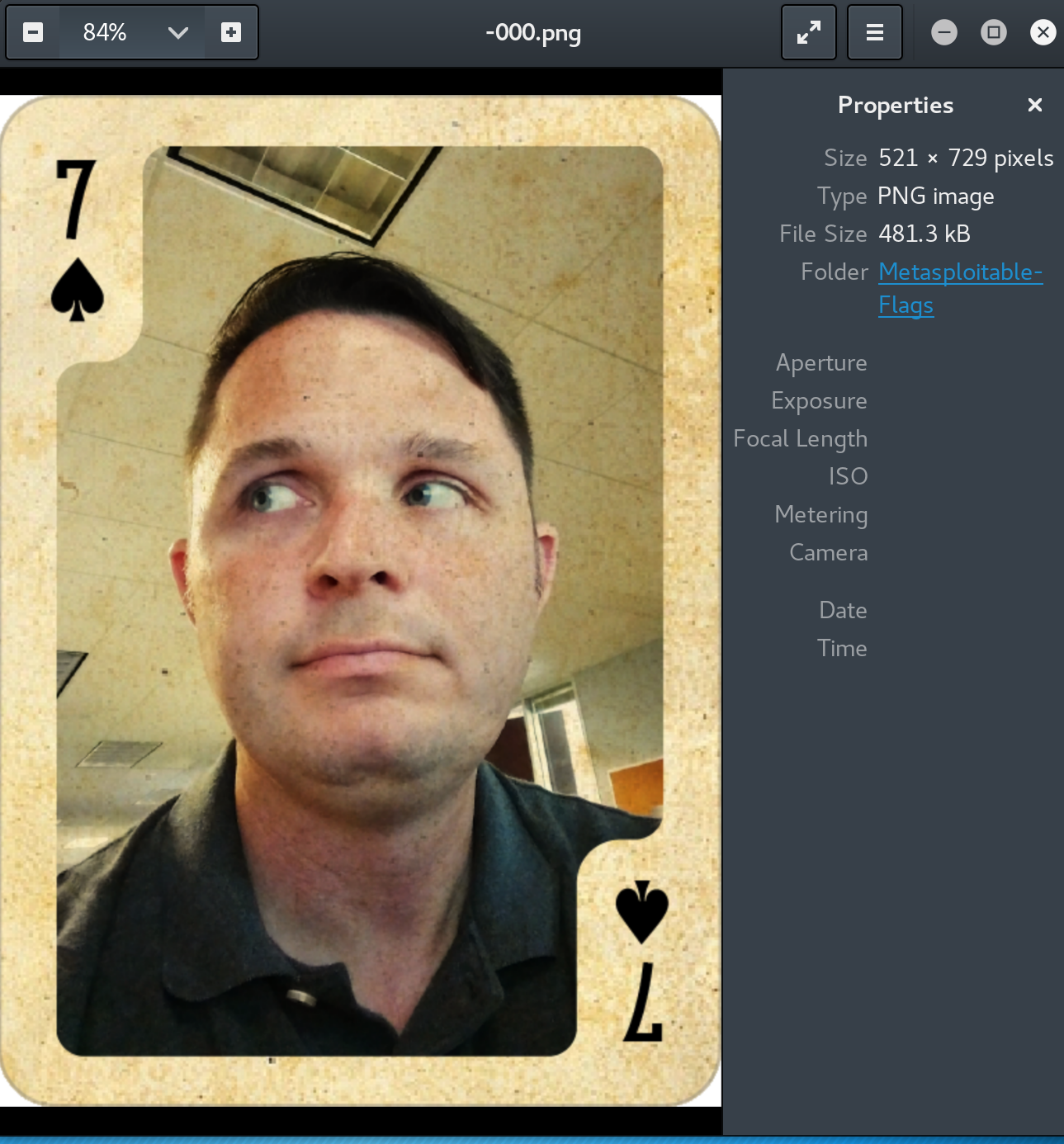 The Ace of Hearts is found at C:\Users\Public\Pictures. It is a .jpg, however all the other flags are .png and also the .jpg flag doesn’t look like the rest. Using binwalk on the file, you will notice that there is a zip file hidden inside. I copied the file and added a .zip extension and then simply unzipped the file to reveal the flag. 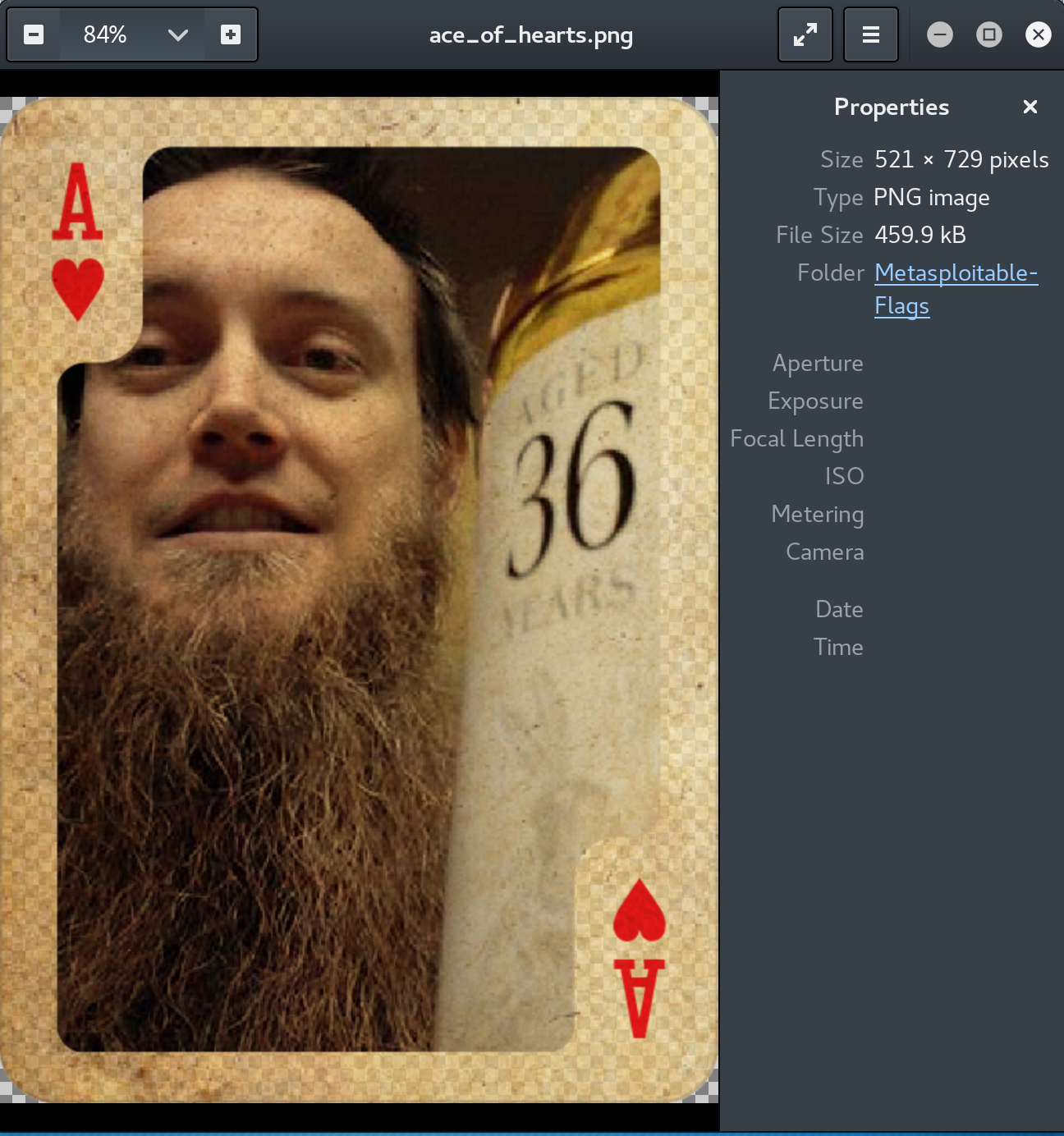 The Jack of Diamonds is found at C:. When you inspect the file, you will notice that it is a 0 byte file. The flag is hidden inside an alternate data stream.

In order to view the alternate data stream use the following:

You will notice that it looks like base64. Pipe the alternate data stream into another file and then transfer that to your attacking machine. I added the extra ‘==’ to the end of the Base64 string and then decoded it into a png to reveal the flag. 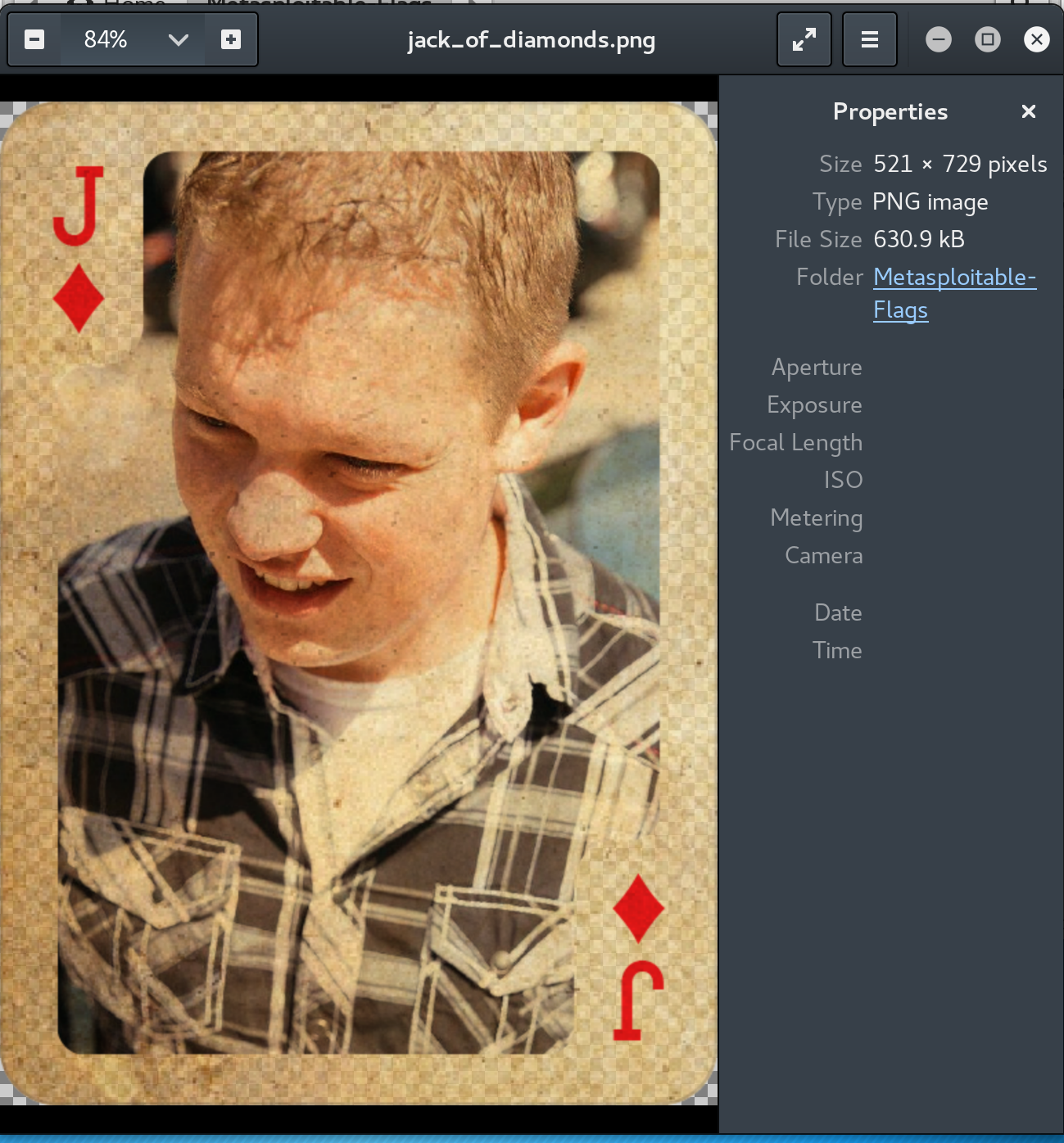 The Four of Clubs is found in C:\Users\Public\Music. The file is a .wav, however using binwalk on the file reveals it to have a .png hidden inside. To extract the .png I simply used a tool called foremost to extract the image. 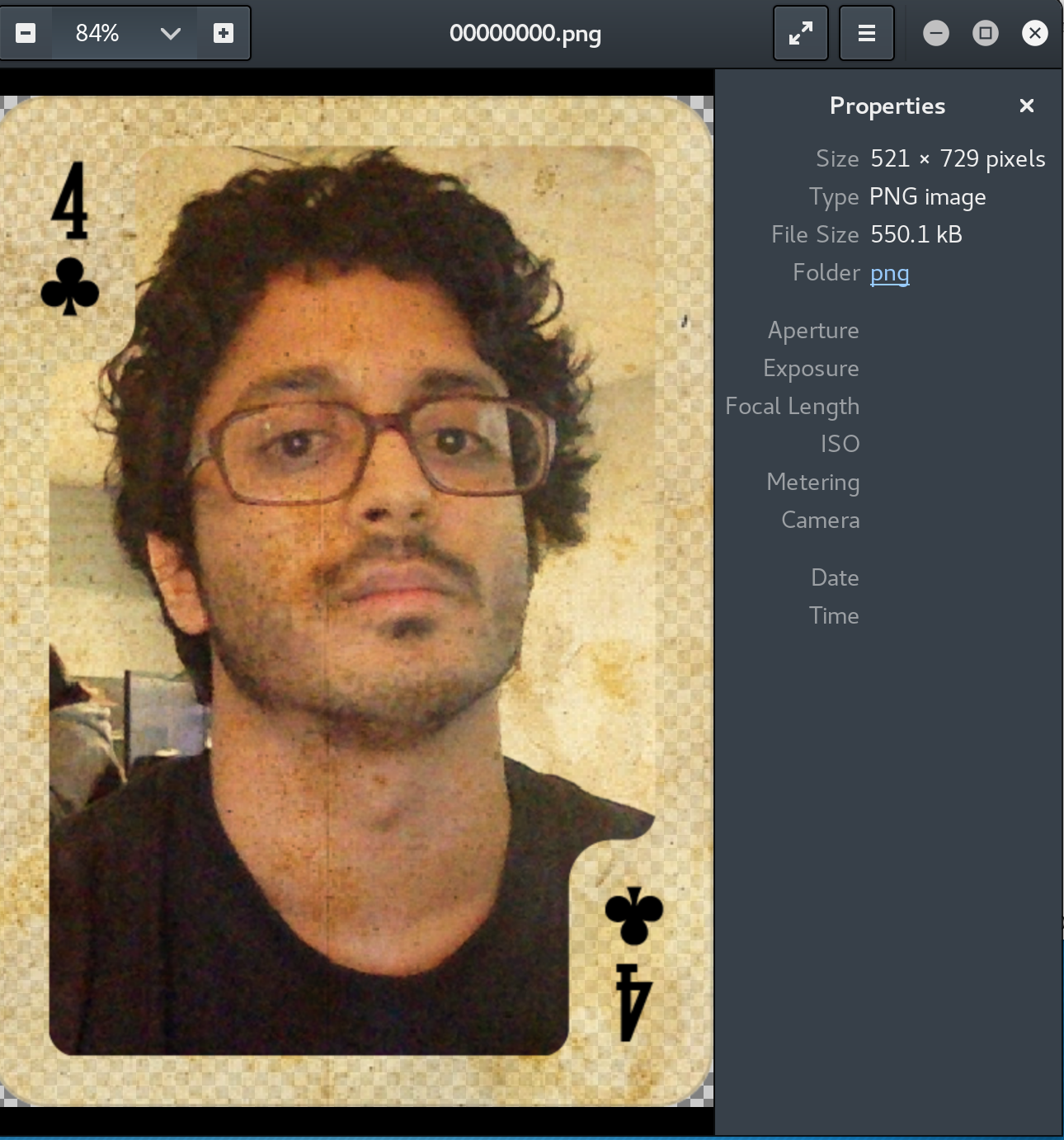 The Ten of Diamonds is found in C:\Users\Public\Pictures. The file a .png file, however it cannot be viewed. Looking at the file with binwalk we can see the compressed component of the image, however there is no PNG header. Opening the file in hexeditor I can see that the letters PNG have been replaced with MSF. I change these bytes to ‘50 4e 47’ which provides me with the PNG header. I save the file and view the flag. 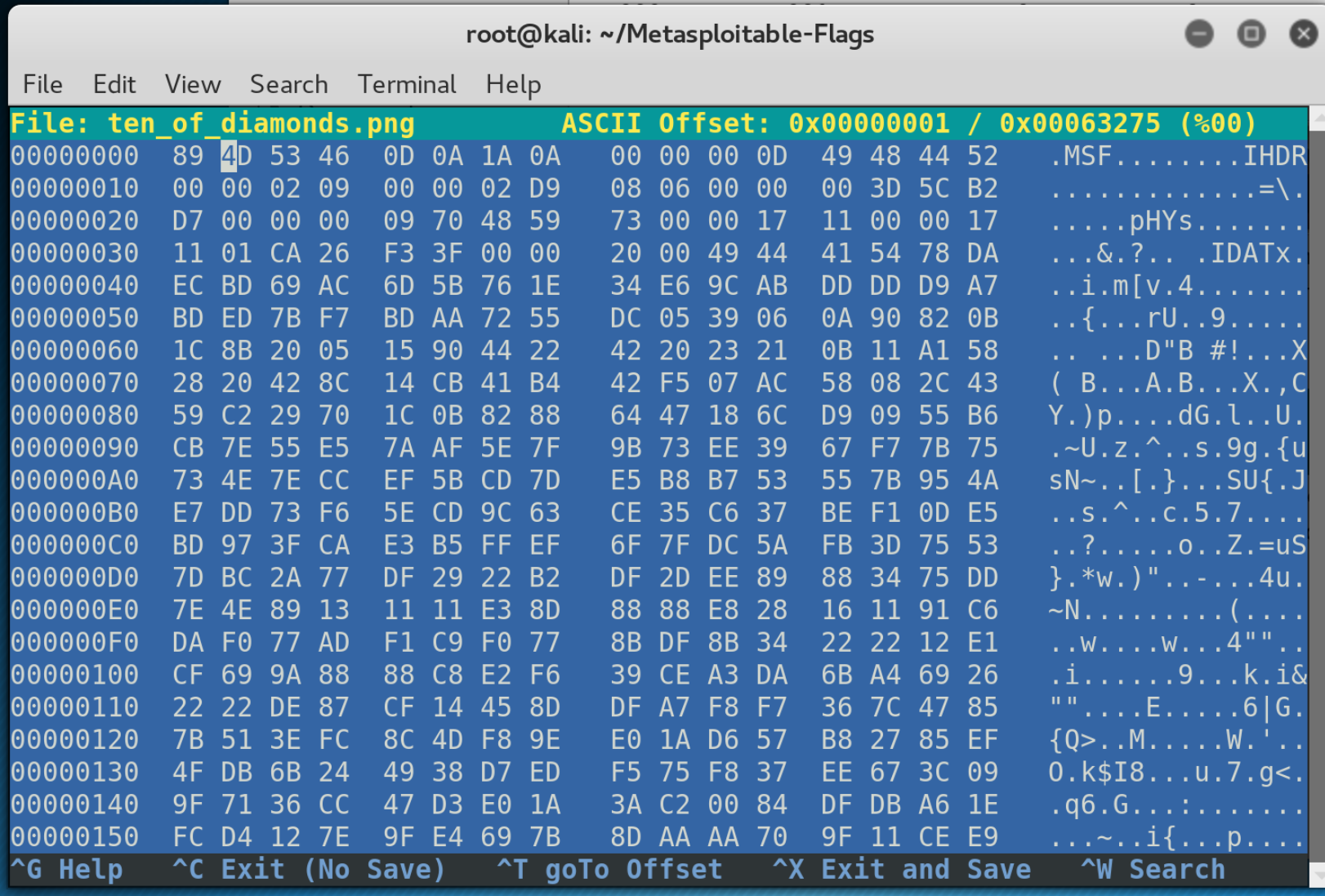 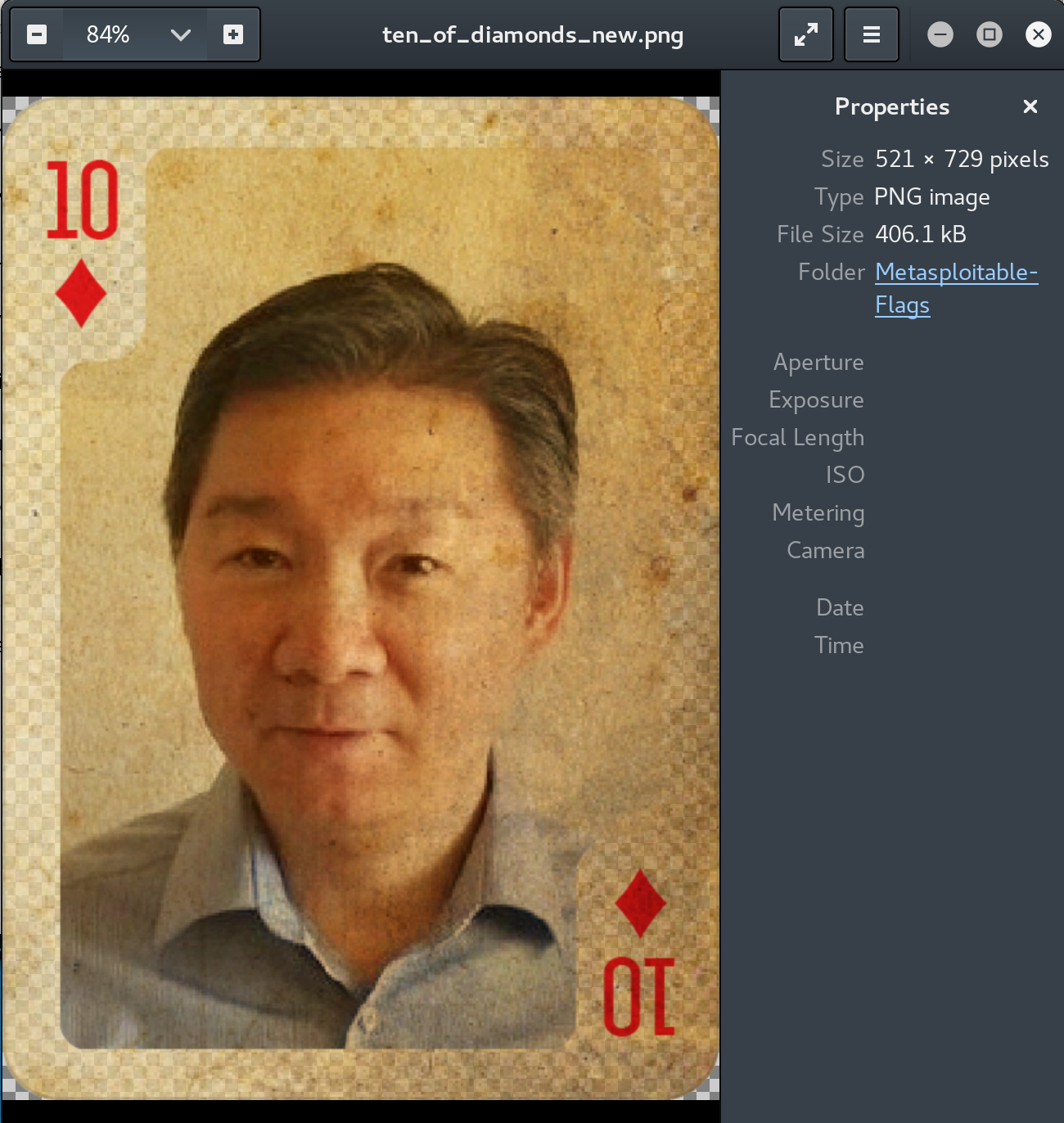 The Queen of Hearts flag is found by browsing the MySQL installation on port 3306. Using the username ‘root’ and no passowrd I was able to navigate through to find the database ‘cards’ and the table ‘queen_of_hearts’. The first entry in the table contacts base64 encoded text. I copied this to my attacking machine and decoded. However, there must be something wrong with the base64 string as the flag appears to be broken. 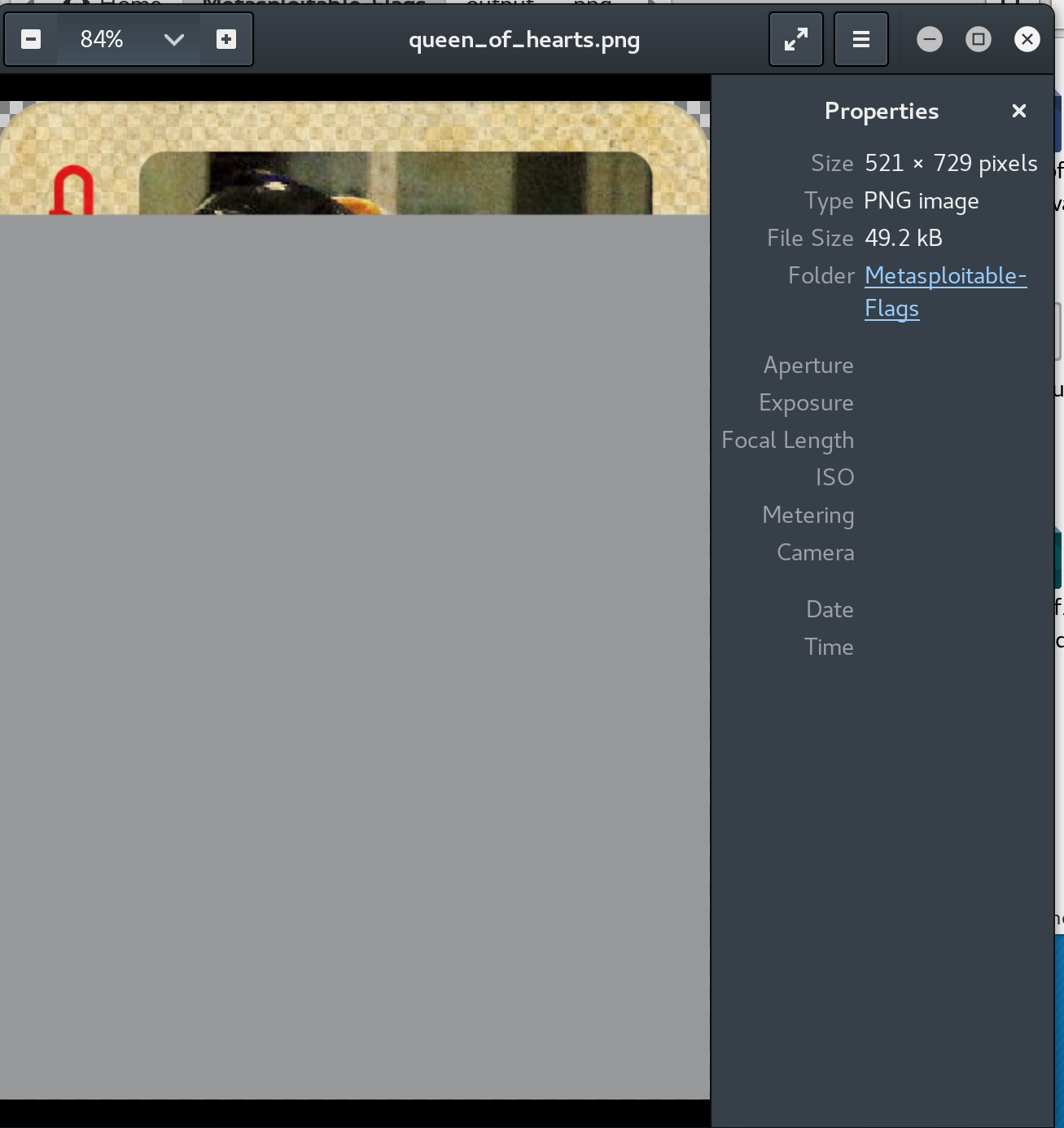 The Three of Spades is found in C:\Windows and is a .png file. However the file does not display. Further Work is needed to decode this flag. To Be Completed.

The King of Clubs is found in C:\Windows\System32 and is a windows PE executable. This flag requires binary analysis to be conducted in order to decode the flag. To Be Completed.

After much searching, I was struggling to find any more flags. After a bit of googling, it appears my advice earlier to ignore using vagrant is the issue. The Vagrant component of the build will complete the installation and include other services such as an IIS server and FTP and more flags! For now, this will do. This blog post is long enough - Look out for a part 2 once I get my Metasploitable build fixed!