I have long been a fan of Hak5, I enjoy their videos and their content is informative and entertaining. I have also been curious about the various tools they have produced, from the Wifi Pineapple to the Rubber ducky they are well built and do their job well. When they introduced the Bash Bunny earlier this year I was even more intrigued. This was a linux computer that enabled physical attacks via USB that could emulate a HID device, RNDIS/ECM and USB storage. But, at $99USD + international postage it is a big expense that I just couldn’t justify.

A Mentor once said to me ‘Real hackers make their own tools’ and this I believe is true as it allows you to fully understand how the hardware and software work to produce the effects you are after. You can create a Wifi Pineapple from a Raspberry Pi, a few Alfa cards and FruityWifi. A rubber ducky can be built using a Malduino Bad USB, but the Bash Bunny was something that eluded me until I discoverd the P4wnP1 project by MaMe82.

The P4wnP1 project utilises a Raspberry Pi zero and weaponsises it into a USB Attack Platform. Like the Bash Bunny, the P4wnP1 can emulate HID, USB Mass Storage and RNDIS/ECM. The project is based of Rasbian Jesse or Stretch and payloads are developed utilising pure Bash. The real highlight of the project was the development of the Windows Lockpicker payload, which took advantage of Mubix’s stealing creds from a locked machine exploit and combined it with a hash crack using John the ripper. The result was the ability of the P4wnP1 to obtain a simple Windows 10 hash, crack it, enter it into the password prompt and access the locked computer (as demonstrated by this YouTube video). The P4wnP1 also takes advantage of the Wifi and bluetooth features of the Raspberry Pi Zero W and allows you to create a backdoor to a PC with a shell via Wifi. This has obvious advantages such as getting access to Air Gapped machines from within range of the Raspberry Pi’s wifi capabilities.

The P4wnP1 also utilises the Duck Encoder that allows it to read in and process Ducky Script. This makes it easily to convert already existing Bash Bunny scripts into the format that is required for P4wnP1.

As it is, the P4wnP1 connects to a computer using the Raspberry Pi Zero’s data micro-usb port. This allows it to be powered and to send data. However, connecting a mico-usb cable with a Raspberry Pi Zero hanging off it is very easy and this is where the Bash Bunny wins out. The Bash Bunny is built like a USB Drive that can be easily plugged in and out. Also, the P4wnP1 only allows you to only have one payload whereas the Bashbunny has a three way switch that allows you to set two payloads an an arming mode. So the answer was to modify the Raspberry Pi to make it more Bash Bunny like.

I first set about adding a male USB adapter to allow me to plug the Raspberry Pi directly to my computer with the need for a cable. I had an old 1GB USB Drive laying around which no longer worked, So i desoldered the head off the drive and soldered it to the connection points on the underside of the Raspberry Pi. 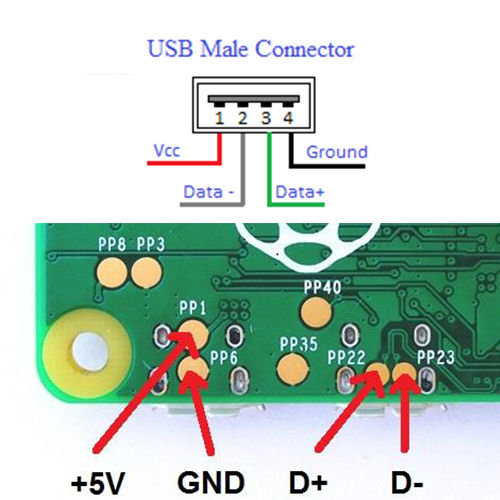 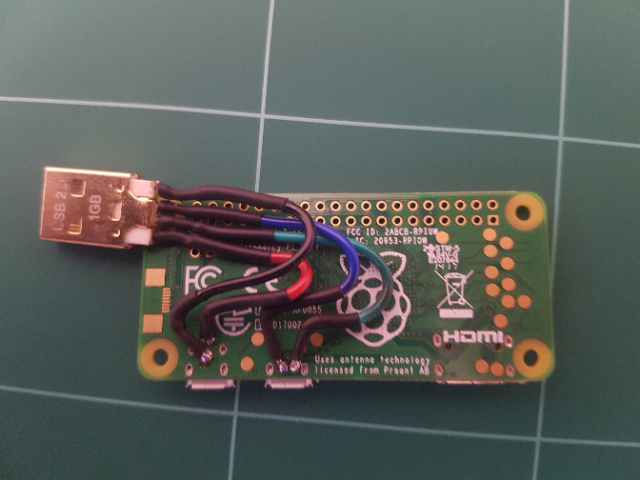 The next thing I needed to do was add a switch. My options were really limited to what is available at Jaycar. My options were further limited to my desire to keep the switch as low profile as possible so that the device was not too bulky. I finally decided on a 3-way DIP switch. This provided me with the added benefit of having up to 8 payloads. 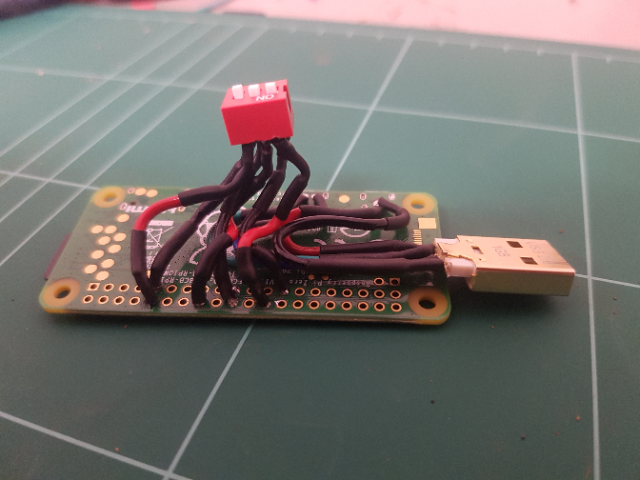 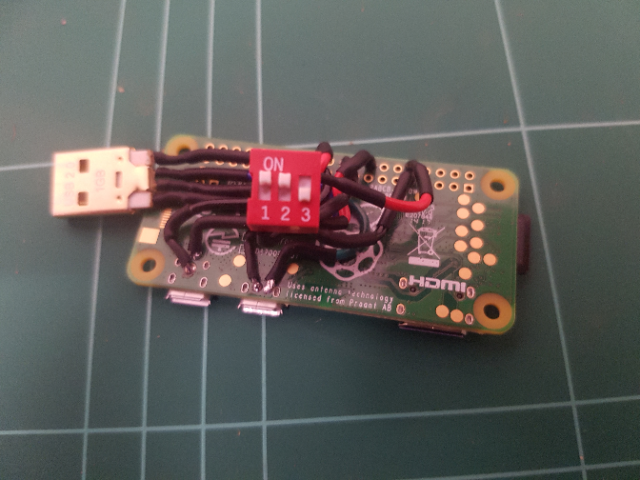 I soldered the switch to the GPIO pins on the Raspberry Pi and then knocked up the following script in python to read their values in.

I made a number of changes to the configuration of P4wnP1 to meet my needs and essentially I was aiming to make a device that was as similar in use and function as the Bash Bunny. I had used a 32GB micro-sd card to flash Rasbian, so I had a lot of space available to me. Therfore I modified the install.sh script to create a 16GB USB Storage file, I then formatted the image file to be ExFat instead of Fat32. I then modified the setup.cfg file to mount the USB Storage file during start up and to use that as the location for my payloads. I created ‘Switch’ folders inside a payload directory and modified all existing P4wnP1 payloads to be named ‘payload.txt’ to allow them to be easily read depending on which Switch folder they were in. The reason for mounting the USB Image file was so that I could create an ‘Arming’ mode that allowed me to plug in the P4wnP1 in any computer and modify and change payloads. As the existing way under the P4wnP1 project meant I had to SSH into the device to change payloads via the command line (not as friendly and as simple as the Bash Bunny).

Mounting the USB Image file does create some issues and when creating payloads I need to take care of when you are accessing the storage as USB Mass storage (via a computer) or when mounted via the Linux file system. This can cause some corruption issues, however there has been nothing significant other than the usual ‘Windows needs to scan and repair this drive’ warnings. It is important that Payloads unmount the drive at the end of their payloads, as this can cause other issues as well. But, with careful management this can be a non-issue.

I also installed Samba and created a network share. This creates a new way of extracting files from a computer which can have added benefits over transfer via USB Mass Storage. The Samba share accesses the linux file system directly, therefore commands can be run via the Linux system to check if files exist or have been transferred. Trasnfer of USB Mass Storage does not sync until there is an unmount or the drive is disconnected. So if files need to be checked or moved via the File system, the network share is a useful feature.

I have created a number of payloads, that range from File Extraction, Mimikatz clear text password extraction, Stealing creds from Windows Password vault as well as a conversion of a couple of Bash Bunny payloads. My payloads are available on my GitHub and I will be adding more as I develop them.

Comparison to the Bash Bunny

The first thing when looking at a comparison of the Bash Bunny and P4wnP1 is the cost. In total the P4wnP1 cost me $30AUD, where as the Bash Bunny is $99USD. The P4wnP1 has Wifi and Bluetooth and the Bash Bunny does not. The P4wnP1 is open source and I can create, modify and do what I want to the software, where the Bash Bunny is closed source and reliant on Hak5 for firmware upgrades. The biggest detractor to the P4wnP1 is its appearance. Where the Bash Bunny wins is that it looks like a chunky USB drive. This is beneficial for penetration testing where you could hand the device over to someone to ‘print your resume’ and have a payload execute. Or if you are caught with it in a PC, you can pass it off as a USB Drive. My P4wnP1, looks suspicious and it looks like a Hacker tool (in same ways that is cooler), but when you consider how most of the payloads are executed and what their intentions are, they rely on physical access and penetration tester plugging it in themselves on an unlocked machine. So really, although it may be uglier the P4wnP1 can still get the job done. The following table was created by MaMe82 to compare the Bash Bunny to the P4wnP1. I have added my modifcations to the table as well. 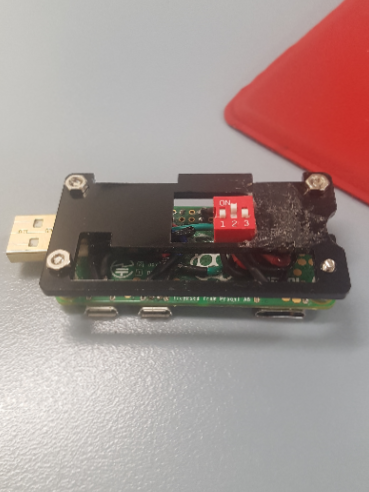 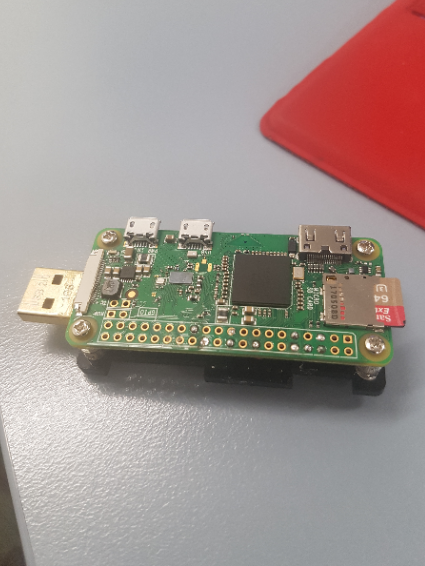 Your probably wondering, why I have called my variant the P4wnP1-Bilby. Well the Bilby is an Australian Marsupial with large ears, a tail and it hops. When you describe a Bilby to someone who has never seen one, the description sounds very much like a Bunny. However when you see the two together it is quite obvious that they are different. I think it describes my project quite well.